The story of Jim's Web World actually begins in 1969 when I first touched an actual computer. (This obviously isn't a big deal today, but at that time, only priestly computer-operators were allowed to have physical contact with the holiest-of-holies.) I was a student at NC State U, working – as a janitor – at the school's Engineering Computer Lab; the computer was an IBM 1130 (which had, as I recall, a whopping 16KB of memory). As technology went, it was a "baby". But I was utterly fascinated by computers and their potential, so I taught myself everything I could about them.

So imagine my delight when, about a dozen years later, I was able to purchase my own computer – a Radio Shack Model II with 64-KB of memory and an astonishing .75 MB of offline storage (3 250-KB floppy drives). The entire system (including a single-font daisy-wheel printer that could print an entire page of text in under a minute!) cost me almost $10K, but I was blown away by the idea that I could actually own a computer!

Then, about a dozen years after that, the World Wide Web exploded on the scene, and the world hasn't been the same since. In 1997 I was among the first individuals to have my own website... The Barber Shop! My first efforts were, of course, amateurish. But I persevered and in 2000, PC World magazine declared The Barber Shop to be a "top ten" site for professional speakers!

But I wasn't done yet. In 2006, I created Jim's Web World to supply domain names, security certificates, hosting and more to public and professional speakers.

And that's how Jim's Web World came to be. But that's not the end – I've been doing other fun stuff since then (the latest being my how-to-be-a-professional-speaker training program, Pro Speaker YOU!).

What will I be doing next? I don't really know, but whatever it is, I anticipate being actively involved with computers and technology for many years to come! 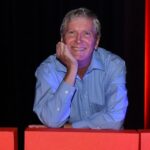